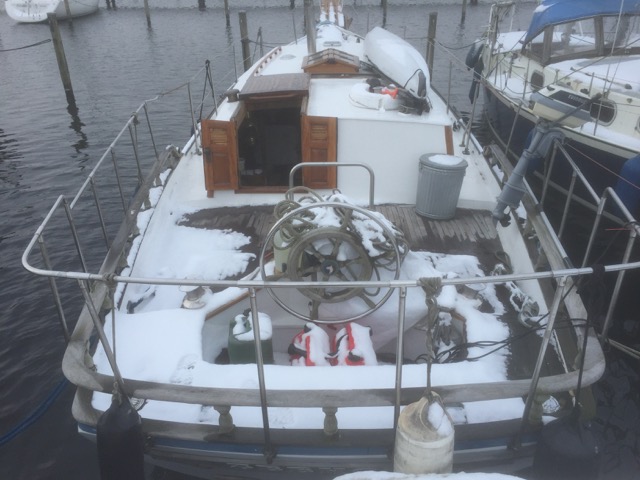 Here a quick update with the things that were done in the beginning of February.
First, we had some more snow and ice, but most of the winter weather seems to be over for now. Some projects were only half-finished due to these weather conditions and could now be continued.


The starboard side of the guard rail is now also placed onto the deck, which means the whole guard rail from stern to bow is now back in place.
Also bought myself a new tool bag to keep all the tools more organised and keep all the tool in a compact enclosure, which worked out very well.

Then it was time to make the engine dashboard entirely waterproof by placing a plexiglass sheet in front of it. With this configuration the keys for starting the engine could not go into the keyhole anymore, so some modification needed to be made.

Now that I’m renting a storage box for all the stuff that could not fit onto the boat anymore, I just packed all the stuff I didn’t need right away (which turned out to be a whole lot) and decided to bring everything to that storage unit. The result is a much roomier and cleaner living space inside the Seadog.