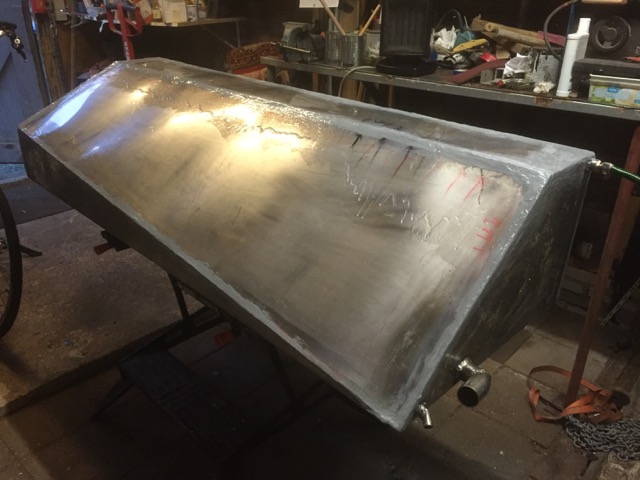 The Seadog has two 150 liter water tanks. One on the starboard side and on the port side. Now almost one year ago the water tank on the port side started to leak its precious water into the bilge of the ship. So that tank was drained of it’s contents and was put out of commission for a while.
In wintertime all of the water taps on the pier are disconnected from the main water supply to ensure that they don’t freeze and get damaged. The Seadog is still disabled and can’t go anywhere (because the engine is still not in working order) so we can’t go to the main tap to fill up the water tank(s).
This means water usages aboard the Seadog in wintertime is restricted to as little use as possible. A mobile water tank is used to get drinking water from the main water supply, so that’s not really an issue. But for doing the dishes etc. it’s nice to have a full water tank, and of course in the ideal situation this should be both water tanks.
So I had kind of a deadline on which the leaking water tank should be repaired and operational again, because I needed to fill both tanks before the taps on the pier got disconnected.
First we (my dad) tried to weld the leaks (there seem to be more than one), but that did’t work out to well and after a few attempts it almost looked like the tank was leaking even more.
So I turned to my trusted ally; epoxy resin. This time a special kind of epoxy was used, one that was purposely created to repair industrial metal objects. This stuff can even be used to repair objects that need to withstand tremendous pressures like propellers, pumps, pipes, and of course tanks. It’s called WEICON Plastic Metal (http://www.weicon.com/pages/en/products/adhesive/2c-adhesive/plastic-metal.php) and can even be used to repair broken tools etc. and after correct application can be drilled, milled, ground and or filed.
It’s quite expensive, but then you do know for sure you got the right stuff.
Of course I first needed to disconnect and remove the tank and transport it to my parents shed where I could clean and prepare the surface before applying this “plastic metal”.
It did take a few tries before all the leaks where properly sealed and in total I might have been working on this “little” project for three to four weeks before the tank could be put back in it’s place. But lucky for me that was just in time before the water taps were disconnected, so all in all it turned out very well. The tank has been in use for almost three months now, without any leakage so I guess it was a great success indeed.