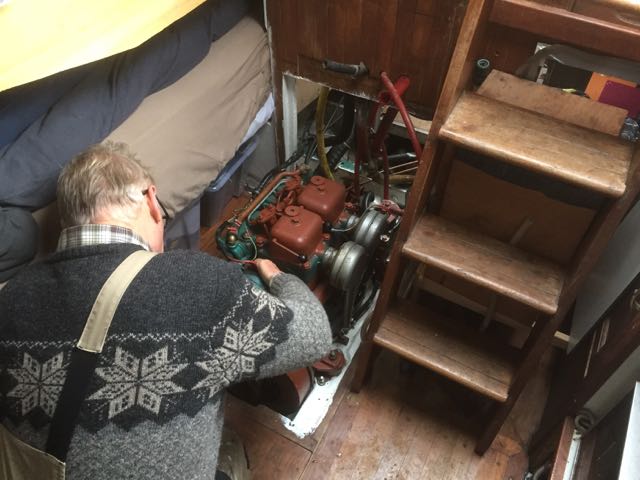 After the new diesel tank was installed, there was still a lot of work to be done before the engine could be started (for the first time in more than 5 years). First the electrical system was checked, and properly installed again. Some of the gauges where not functioning correctly (plus had a lot of moisture inside) and also the lighting on the dashboard was renewed. I had two identical dashboard which I combined into one that was functioning correctly. I also added two new gauges to the engine dashboard. One battery volt gauge and an hour counter gauge to automatically count the running hours of the engine.


Then came the throttle, which was totally stuck and unusable. With some help of my father and a lot of patience we managed to dismantle the throttle for cleaning. Both the throttle and all of the electric system was now working correctly and the engine could be started for the first time.
All did not go O.K. the first try though, but after some effort with the manual diesel pump and venting of the diesel supply the engine did start and kept on going. But again, all was not well.. One of the cylinders was getting way to hot. Finding and fixing that problem took more than a few weeks, but it was also solved eventually.

We took the exhaust manifold off and on a few time checked the cooling chambers, tested the thermostat, and checked the internet for all sorts of solutions. Turns out that even though we thought we cleaned all the cooling chambers correctly, somewhere there was still some debris stuck that was blocking the cooling water from flowing through. The solution that finally fixed this problem, was to use a very strong chemical (hydrochloric acid) and run that through the cooling system, let it sit for 30 minutes and pomp it out again.
Sadly, then there was another problem. If the engine was running more than 20-30 minutes it started to run unevenly and would eventually stop running altogether. We did notice that one of the fuel injectors was leaking bits of diesel, so eventually concluded that this should be the cause of the problem. After disassembling the fuel injector from the engine we took it to a local company that could clean and check the injectors. Actually we already brought both of the fuel injectors to them a few month ago and they totally refurbished them. But somehow this one was not working properly. Luckily they found the problem and fixed it free of charge (and even provided some new sealing rings etc.). And yes! Now the engine was finally working!
And for those who don’t believe it here is a small video clip of one of the first times then engine was running ;-).