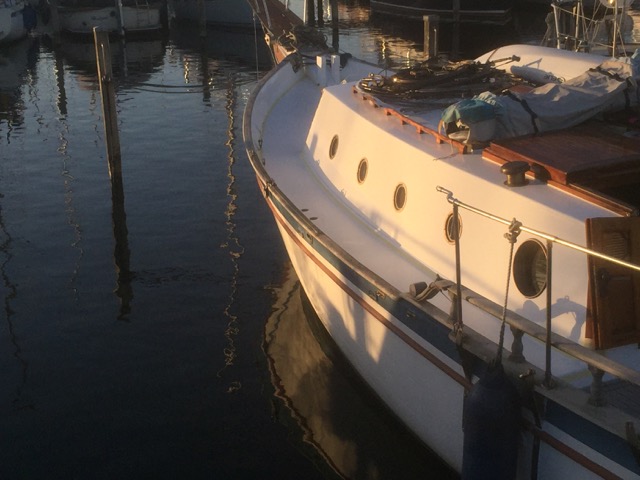 Now that the engine is fully refurbish it was time to check out the diesel tank.
The Seadog still had the original steel tank from 1974 which turned out to be in a really bad shape.

The tank had two inspection holes on the top to check out the inside, so at first we inspected the tank through those holes. Strangely enough the tank was filled to the top with diesel, which appeared to have come out of nowhere. Two years ago the tank was completely empty and no extra diesel was added since then. The only way that diesel could have gotten inside the tank was through the overflow pipe of the diesel heater, which is connected to the diesel tank of the engine. Which means the regulator of diesel heater is malfunctioning.
After pumping out nearly 160 liters of diesel it was clear that the diesel inside the tank was contaminated. The diesel was more murky and darker than usual, plus there was a lot of sludge left after draining the tank, which indicates diesel bacteria. Now that the tank was empty we could lift it out of the floor and take it outside for further inspection. After cleaning the tank from the inside and the outside it became clear how badly corroded the steel was. When cleaning the outside to the tank with a vacuum cleaner for a second time the suction even broke a hole inside the bottom of the tank. In one way I was very lucky the tank did not leak all of it’s 160 liters of diesel inside of the boat, but the sad part is of course the tank was beginning to look beyond repair. It would have been a lot of work to repair and clean this tank. And even if it was fully restored it still would have been a steel tank (not stainless steel), which would eventually start to have the same issues all over again.
So the decision was made to get a new diesel tank. One problem though, I could not buy a regular tank from a marine shop. The tank needed to have a custom shape in the form of the hull of the Seadog. After some research I also decided not to go for a stainless steel tank, but a special kind of plastic tank. These plastic tanks seem to have some superior characteristics over their steel counterparts. For one, there is less change of diesel bacteria forming, because the plastic parts have less change of forming condensation inside the tank. There are a few companies in The Netherlands that can build these custom diesel tanks for marine purposes, and after shopping around I found a company in Koudekerk aan de Rijn which came with the best offer. The company is named Liquid Storage (http://www.liquidstorage.nl) and they make all kinds of storage tanks. There service was impeccable and I can really recommend them to anyone who needs new tanks aboard their ship (also for drinking and wastewater tanks).
We brought the old thank to this company where they used it as a mold to create the new one.

While waiting on the new diesel tank I cleaned the bilge underneath the floor where the tank used to be. While cleaning there I found out there was a lot of wasted space besides the diesel tank that was unacceptable before (with the tank in its place). When living aboard even a little extra storage space is always welcome. To make this space accessible I needed to saw the floor up into pieces to create hatches and add some bulkheads to divide the space up. After that was done I painted the bilge and the new storage spaces with two layers of bilge paint.

Because there was some more time before the tank was finished we also painted the deck with special non-skid paint and mounted the windlass, plus the guard rail. The diesel heater has also gotten its own overflow tank (with its own gauge), so that the old contaminated diesel can be burned in the diesel heater this winter without any of that nasty stuff getting inside the new tank. The issue with the diesel heater regulator was also solved so it should not be overflowing anymore.
All the hoses to and from the tank (plus all the filters) where also replaced, so everything connected to the engine is now brand new.
And voila, new storage spaces, clean bilge, new overflow tank, new diesel tank, and a freshly painted deck.
With the guard rail back in place the Seadog is starting to look more and more like a real sailboat again. After more than 5 years inside the harbour, the first trip is almost becoming a reality.
The next step will be connecting all the wiring, hooking up the battery and if all goes well starting the engine for the first time.