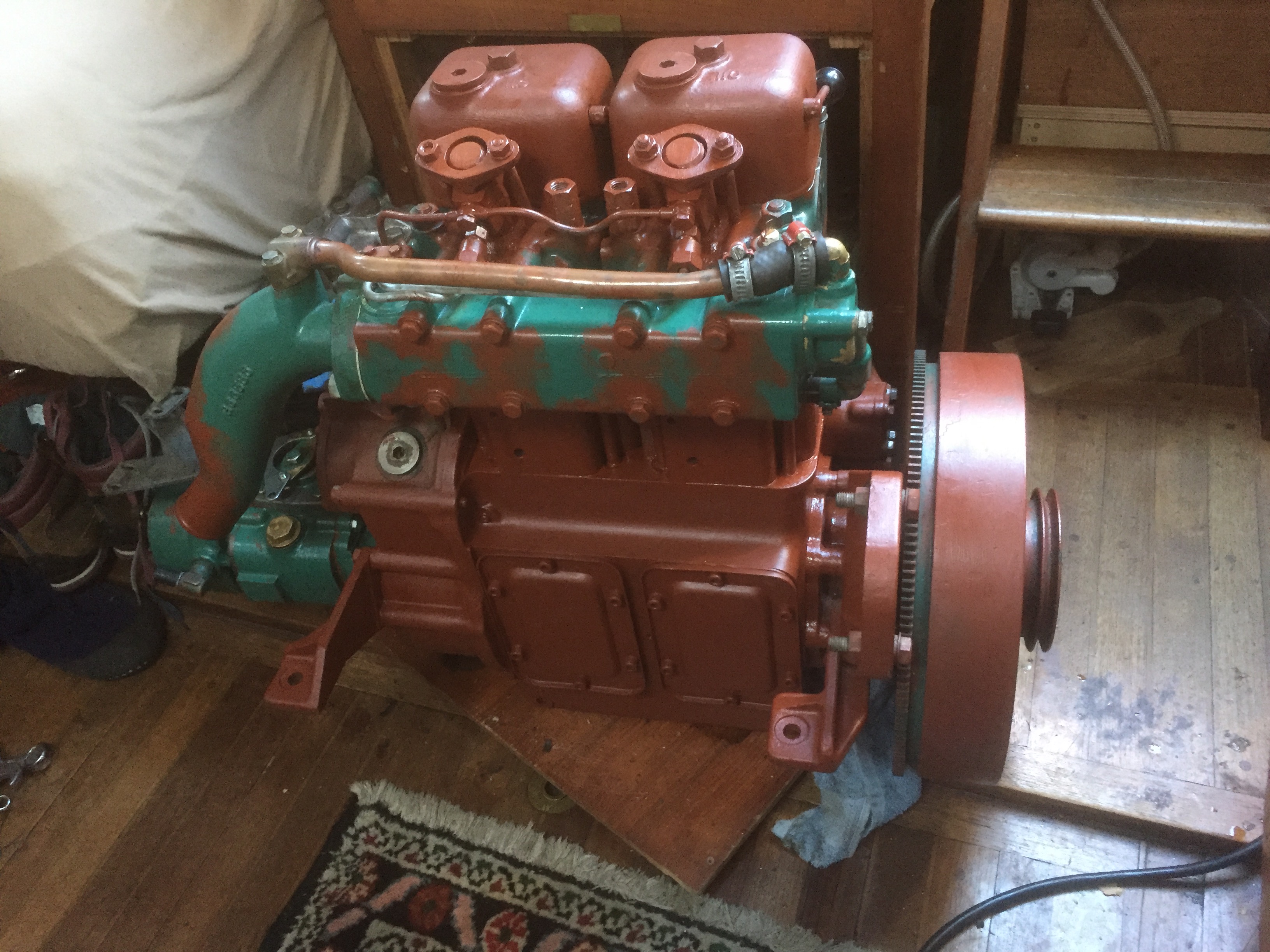 In 2012 we started to take apart the engine in an attempt to do a complete overhaul. Most of the parts that could be disassembled were taken off and inspected. It was quickly apparent that most of the vital parts where severely damaged and needed to be replaced. The cylinders and gearbox had freeze damage which where visible by cracks at points in the cooling channels. Most likely those parts would need to be replaced so we kept the engine disassembled, storing the parts in the front of the boat until we had more time to proceed with the overhauling process.
All the work that was done in 2012 can be viewed here: https://theseadog.life/category/milestone-4-the-engine/
4 years have come and gone while the engine was lying around with it’s bits and pieces scattered around in the cabinets aboard. The main reason for all the delay was the fact that there where more urgent repairs needed, like rebuilding the main cabin and other issues regarding rotting away of wood which was causing leakage. Also some personal issues caused work on the boat to be stopped for quite a while.
But now that the whole upper side of the boat is finally finished it was once again time to start work on the engine. So in the beginning of July the engine was taken out of it’s spot and further inspection began. This was also a good excuse to clean the bilge (the part of the ship below the engine) and repaint it with a bright white color. This way one can easily see if the engine is leaking oil, or when water is coming into the bilge indicating other leakage.
We decided that if we where going to repair this engine, we were going to do it without any constraints. Meaning we where going to do a complete overhaul to make the whole engine truly as good as new. We had acquired an almost identical engine from which we could take the parts that needed to be replaced.
The definition of a completely overhauled engine is the following: “An overhauled engine is an engine which has been removed, disassembled (torn down), cleaned, inspected, repaired as necessary and tested using factory service manual approved procedures. The procedure generally involves honing, new piston rings, bearings, gaskets, oil seals.”
So that is exactly what we did, and then some!
Literally all the parts were disassembled, cleaned, repaired or replaced. Some of the work like honing the cylinders and restoring the cylinder heads we could not do ourselves, so those parts were brought away and were restored by professionals who had the specific tools needed for those tasks. Other parts were replaced by new (Volvo Penta) parts like the piston rings, fuel atomizer, engine rubbers, fuel filters, oil filters and of course all the gaskets, oil seals etc.
Getting the engine back in position was quite a challenge given he fact that the whole engine block was now back to it’s original size and weight (which is around 260 kilogram). With a 3 meter long heavy-duty steel construction beam, a manual hoist which could handle 1 ton of weight and some wooden blocks we created a support system to hoist the engine into place.
Now 3 months later (October, 2016) the engine is once again back where it belongs, in tip-top condition and ready to go for a spin.
We still have to do some minor work before we can take it for a test drive, like connecting up the diesel tank and hooking up the electrical systems etc. Also the diesel tank itself is very old and rusty and will likely need to be replaced. But more on those topics next time….