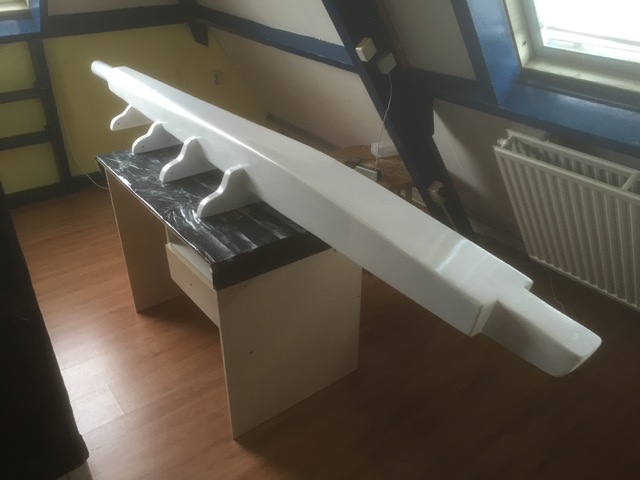 Now that the beams that hold the bowsprit in place have been restored, it’s time for the bowsprit itself to be restored to it’s former glory. The bowsprit has been standing in my parents shed for a couple of months now, which means the wood should be perfectly dry. I have been postponing this project for a while because the wood needed to dry, but also because I knew this was going to be a lot of work. My parents have sold their house (which of course also includes the shed) so the bowsprit needs to be out of the shed and on the boat before the end of April, which created a welcomed deadline for me to get going on this project.
As you can see in the photo’s there where some pretty bad spots on the bowsprit that needed to be repaired. First the bowsprit needed to be stripped of the old layers of paint, to see how bad a shape the thing was in. After a day of grinding and sanding it was clear to see there where some pretty bad spots here and there, but on the whole it seemed very doable.
So after some more preparations (like some more sanding and degreasing etc.) once again the epoxy buckets were taken from storage and where mixed together with some powder to create a putty that could fill in the big holes. The thing was sanded again with a smaller grain (p120-p180) and coated with 3 layers of pure epoxy to fill in the smaller cracks and pinholes. Then again some sanding needed to be done with an even smaller grain (p220) after which the first (primer) layer of paint could be added. After that the first two white layer of paint could was added and then it was again time to sand with an even smaller grain (p320). See the last picture for the result end result. Well actually it’s not the end result as of yet, because another 4 layers of white paint still need to be added (with one more sanding session in between), but most of the (hard) work has been done, and it seems all will be finished before the deadline.
Then the bowsprit, plus all my other stuff that is still in my parents house (and shed) will be transported aboard, at which point all I own will officially be aboard the Seadog. Also i’m hoping to finally remove the tarp in the beginning of May, which will be a very joyous event indeed. Because after almost 5 years of being sheltered the roof of the Seadog will then finally see sunshine once again. So hopefully the next post will have some photo’s of the Seadog (and me as well) bathing in the sunshine.