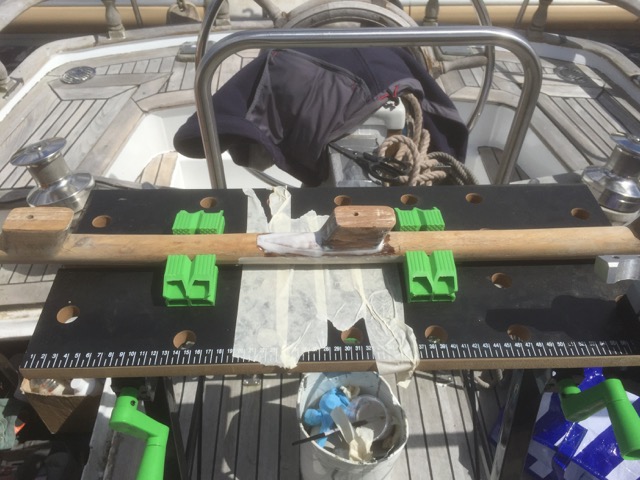 One of the teak hand rails was partially broken. To fix this issue the epoxy was taken out, to safe the day once again. Teak can be tough to repair because it’s a very greasy kind of wood. That is why most glues, paints or varnished don’t really bond well to teak. By first degreasing the teak with acetone and using a special diluted kind of epoxy that really impregnates the wood one can overcome this greasy problem. After the first impregnation layer was applied and became sticky enough (after an hour or so) a next layer with a more “glue like” character was made with a special kind of epoxy filler. This makes the epoxy thicker and thus easier to apply, plus it fills the gapes better.
After the epoxy has dried enough (about 2-6 days) it could be sanded and varnished with a special kind of impregnation 2 component varnish which is specially made for teak. After 5 layers of this 2 component varnish, two more layers of extra UV filtering 2 component varnish fill be added for the finishing touch. I plan to do the same with all the other teak outside, with exception of the teak deck.