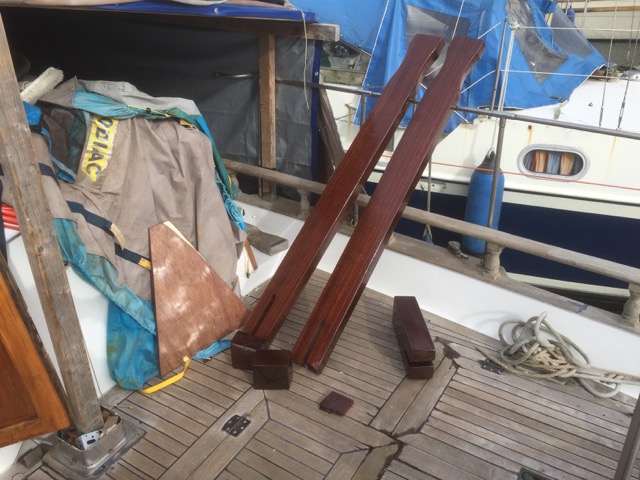 In late February the Seadog finally got it’s bowsprit beams (the beams that hold the bowsprit in place) replaced. As you can see it the photo’s those original beams where in very bad shape indeed and in need of quick replacement. Especially because the boat is tied up to those beams.
The beams are about 1.70 meters long and reach all the way from the keel of the boat through the deck. There they were placed in a big piece of concrete that also fills a portion of the hull in the front of the ship. I guess that concrete block is also there for some extra ballast.
The two wooden beams go up through the deck for about 50 cm to hold the bowsprit in place and also dubbed as two polls to tighten the ropes that tie up the boat.
One of those beams was already visibly rotten and even broken off on the top of the deck while we where removing the teak deck a while ago. The other beam still seamed o.k. so the boat was tied up to that one beam.
After closer inspection in February I was kind of shocked to see the real state of affairs. That second beam was indeed also pretty rotten beneath the deck, and you could easily (by hand) break the beam apart. Not good, considering the boat was only tied up to that one beam…
So another project was started. Luckily my dad had a perfect enormous wooden hardwood beam standing around. That thing was so huge it did not even fit in the shed (which is not a small shed by far). Because it had been standing around outside we first needed to cut it in two big pieces so it could stand inside to dry for a while (which we did a few weeks before this project started). After that we also removed some of the surface of the wood, to expose the inner perfectly dry (and beautiful) wood core. And so that’s the wood we made two new beams with. We did have to bring the wood to a friend of my dad, which had a big enough saw table to cut the beams into the two new pieces.
After removing the original beams and also removing some concrete (plus some sanding and cleaning etc.) the beams could be fitted and created to exact measurements. Some more sanding of the beams was done and then they were transported (with the help of my sister’s car) to the attic of my parents house. There they were treated with a few layers of epoxy and after drying (outside temperatures where still to low) they were transported back again.
Now it was time to permanently place them through the deck into a new concrete base. But a few other thing needed to be done before this could happen. First, a smaller wooden forelock needed to be made with on top of that a “little” middel beam to hold the two big beams in place and fix them on the steel pipe that was inside the original concrete base. Also a new wooden plate was made to seal off the base, so that concrete could be poured into that base and left to dry. Then that concrete base would become one huge block with the bottom of the beams inside of it and so they could not move another inch. Another wooden block was made to also fix the beams in place directly beneath the deck. This block was fixed to the deck and the beams with epoxy.
Before this while project started I made (see the pictures below) some 3D drawings and measurements to make sure everything would fit according to plan. We did alter the base for the beams in the sense that we used more concrete and less wood, but this 3D blueprint did come in handy and to be sure we had all the correct measurements.
After all the preparations were made my dad was there to help. We placed everything into place and started poring concrete, plus filling and glueing with epoxy. The whole process went pretty smooth and the end result is even better than the original construction was. Next project will be the bowsprit itself, but more on that in the next post.